http://www.autoblog.com/2010/03/02/geneva-2010-audi-a1-e-tron-wankels-its-way-to-the-show-floor/ No, Wankel is not really a verb. At least, not that we know of. But it is the last name of the man who designed the rotary engine, and we think our man Felix would be more than pleased with the latest application of his barrel-shaped internal combustion powerplant. In case you missed it before, that would be as the range-extender buried inside Audi's new A1 e-tron electric vehicle, which is currently on display at the Geneva Motor Show.As we told you before, Audi's smallest e-tron features a 12-kilowatt-hour lithium ion battery pack that feeds a steady stream of electrons to a front-mounted electric motor with 102 peak horsepower. The aforementioned Wankel rotary engine features one lone rotor, displaces 254cc and sits just aft of the battery pack under the rear seat. Why a Wankel? Audi says the complete package weighs in at just 154 pounds and puts out a nice, steady stream of power at a constant 5,000 RPM. 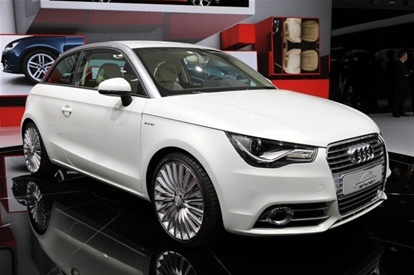